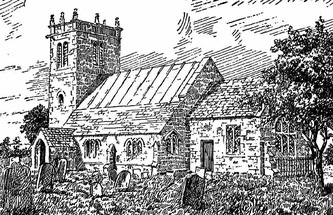 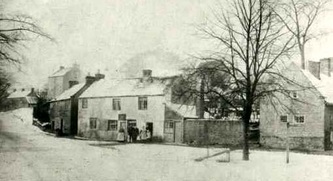 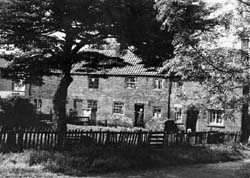 Harriett Rowe was born at Skegby, Notts in 1831 to parents Samuel Rowe and Sivel Townroe. She was the 4th of the couple’s 8 children.

At the time of her birth in 1831, and in the 1841 Census returns Harriett lived at Forrest, Skegby, which I believe relates to Forest Road, Skegby. By 1851 Harriett had left her family home in Skegby and lodged down the road, now age 20, she worked as a Framework Knitter. Her mother Sivel died in 1852 and her father Samuel died in 1857.

In 1858 Thomas Riley married Harriett Rowe, then age 27.  In 1860 their son Joseph was born in Pinxton and the couple set up home and business as a publican of the New Inn, Wharf Road, Pinxton. Shortly after in 1864 they had daughter Elizabeth.

They stayed in the Pinxton area, living at Long Staithes in 1871 and Church Road in 1881. After the death of her husband in 1890, Harriett age 60 became a lodging house keeper, on Wharf Road Pinxton, supported by her grandaughter Mary Henchcliffe Riley. After the 1870s a number of women took in travellers and lodgers as a means of supporting their family, following the death of the main breadwinner.

Following the marriage of her daughter Elizabeth to Freer Samuel Roe in 1896, Harriett and grandaughter Mary moved to Netherfield, where they lived  at 7 Fairview Cottages, on Meadow Rd, which was a few doors away from Elizabeth. Mary emigrated to the USA and Harriett died in Netherfield in 1910, age 79 a short time after. 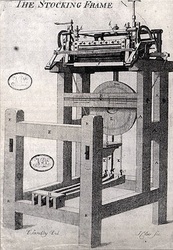 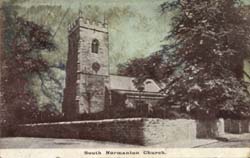 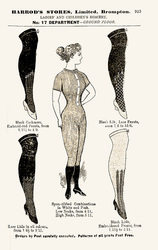 Samuel Rowe was born 1793 at South Normanton to parents John Rowe and Mary Pesson. He was baptised in South Normanton on 19 Jan 1794. He was the 4th of the couple’s 9 children.

In the seventeen century, most of the houses in the Parish of South Normanton were stretched out along Town Street, which ran from present day Lees Lane at the Southern tip to Sporton Lane at the Northern end. As in many other villages, the Church lay at the centre of the community. The earliest surviving map of the Parish dates from 1699. This shows the extent of common ground. Part of ‘the common’ was enclosed by agreement in 1768 and the rest (by Act of Parliament) in 1798. The Parish was still a predominantly agricultural settlement with the farmers, along with the squire and the rector, forming a middle class core in what was ostensibly a ‘labouring village'.

During the second half of the seventeenth and first half of the eighteenth century, South Normanton had two main groups of manual labourers; framework knitters and miners. Each group had its own traditions and culture. They rarely mixed with each other and even less with the farmers. The framework knitters were nicknamed 'shiners'. This derived from the state of their trouser seats after continuously and monotonously working at their machines for 14 hours each day. Their homes tended to be congregated around the Dog Pool, along Water Lane, and up narrow alleys, gennels and yards, particularly around the Old Market Place (just off modern day Sporton Lane).

At the time of the 1841 Census, he lived at Forest Skegby, where his occupation is listed as a hosier. The term hosier originated as the collective term for products of which a maker or seller is termed a hosier; and those products are also known generically as hose. By 1851 he had moved to Mansfield Rd / Turn Pike Lane at Skegby and had taken up employment as a Frame Work Knitter. He lived all his life in Skegby, working in the hosiery trade until his death in 1857 age 64. 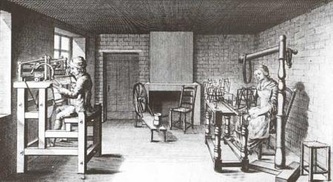 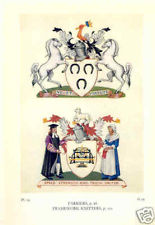 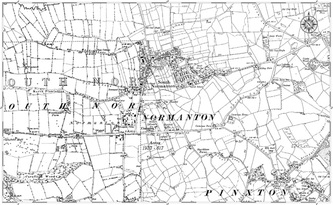 During the second half of the seventeenth and first half of the eighteenth century, South Normanton had two main groups of manual labourers; framework knitters and miners. Each group had its own traditions and culture. They rarely mixed with each other and even less with the farmers. The framework knitters were nicknamed 'shiners'. This derived from the state of their trouser seats after continuously and monotonously working at their machines for 14 hours each day. Their homes tended to be congregated around the Dog Pool, along Water Lane, and up narrow alleys, gennels and yards, particularly around the Old Market Place (just off modern day Sporton Lane).

The village’s most famous son, Jedediah Strutt was born in the village in 1726. He was granted a patent in 1756 for his invention of a framework knitting machine for making ribbed stockings. This was later to become known as ‘the Derby ribbed stocking machine’. This invention was at the cutting edge of the celebrated Industrial Revolution. It was Strutt who was responsible for the erection of the cotton mills at Belper, which still stand and which have acquired World Heritage status. These buildings are generally regarded as the first purpose built industrial factories in the World.

In 1811 the knitting of stockings was probably the village’s chief form of employment. Up to the end of the Napoleonic Wars, the stockingers did quite well and were able to earn upwards of fourteen shillings (70p) a week. However, after this period, after a series of bad harvests and the effect the War had had on increasing food prices, the amount of money people could generally spend on stockings dramatically affected the market place. Wages fell by about 40 per cent and the industry never really recovered. Nevertheless there were still 147 framework knitting machines in the village in 1845

In the 1841 census John lived at Lane Side, South Normanton and worked as a Frame Work Knitter, he lived with his wife Mary and daughter Sarah. John died in 1843 age 78. 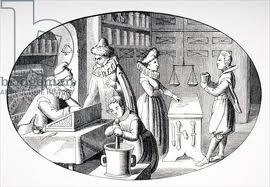 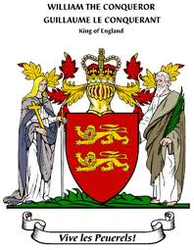 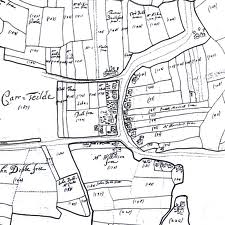 Whether Celtic or Anglo Saxon, all the evidence points to the area of land we now call South Normanton having been settled at a very early date in the history of our country before the form of any written evidence.

Following the Norman Conquest of 1066, much land in Derbyshire (and other counties), including South Normanton was granted by William the Conqueror, under the feudal system brought across from France, to his bastard son William Peveril.

Towns are built on trade. For centuries its focus was markets and fairs. The medieval housewife would buy much of what she needed at stalls regularly set up and dismantled. Gradually stalls were replaced by permanent shops with living space above or behind

Shops lined many a medieval market place or high street. They could even be built on bridges. Typically a shop would have large, arched, unglazed windows. The windows could be protected at night by a pair of horizontal shutters, the upper one of which could be hooked up to provide shelter while the lower one folded down to form a counter, or one shutter could be hinged to form a counter.

By the late 17th century England and Wales had about 40,000 shopkeepers, according to the estimate of pioneer statistician Gregory King 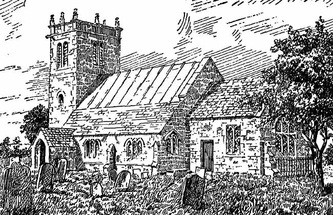 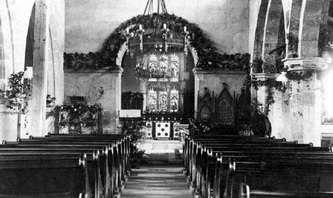 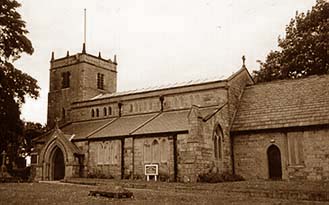 Sivel Townroe was born 1801 at Skegby to parents Roby Townroe and Ann Purgy. She was baptised in Skegby Church on 22 Feb 1801.
At this time Skegby had a population of 416 people. I think she was the 3rd of the couple’s 4 children.

in 1824 Samuel Rowe and Sivel Townroe had their first son “Robey” out of wedlock in December, soon after they married on 25 April 1825 at Skegby, when Sivel was 24 years old.

In Skegby there was an extensive coal mine, and several limestone quarries and kilns. A steam corn mill of 16 horse power was erected in 1820 by the late Mr Richard Adlington's father, of Tibshelf in Derbyshire. From time immemorial the village feast has been held on the first Sunday after the 10th of July. Though the church at Mansfield is dedicated to St. Peter, the ancient fair there was held on the 10th of July, and it may be that the inhabitants of Skegby held their feast at the same time.

Sivel lived all her life in Skegby, she died in 1852 at Skegby age 51, when her youngest child Elizabeth was 11 years old. The meaning of Sivel may come from a craft, such as the name "Carpenter" which was given to woodworkers. Many of these trade-based last names might be a profession in some other language. Many names like Sivel originate from religious texts like the Bhagavadgītā,  the Bible,  the Quran,  etc. 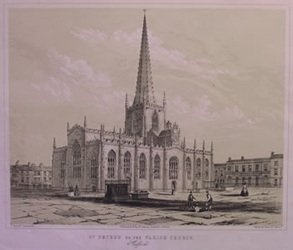 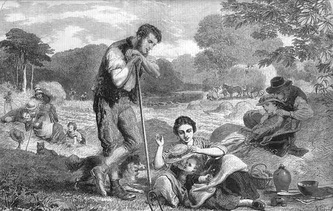 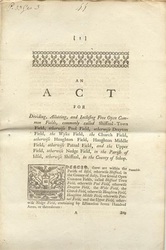 Roby was born in 1769 at Skegby, Notts to parents Robert Townroe and Ann Clark. I believe he was the 2nd of the couples 5 children.

Following their marriage they set up home at Skegby where Roby was a farmer. Their first child Roby was born in March / April 1797, indicating Ann was pregnant at the time of her marriage to Roby, they went on to have Sarah (1798) Sivel (1801 and Samuel (1805).

Roby is listed in White's 1832 Directory of Nottinghamshire as “Townroe, Roby a Farmer at South Normanton”

“In the mid-eighteenth century, the huge social changes that followed the industrial revolution set testing new problems for British farmers. During that period Britain changed from an agrarian to an urban society. In the late 1700s, 75 per cent of the population lived in the countryside, but the balance was already shifting rapidly. Prior to the upheaval, the bulk of British farming had been done by smallholders, cottagers and crofters. It was subsistence farming, the mainstay of a peasant economy. Most Britons had been, to a greater or lesser extent, self-sufficient when it came to food. They kept geese, a pig, and possibly a milking cow or a goat: they had a share in a communal flock of sheep and grew their own vegetables. Profit and productivity now met the peasant in a battle for the countryside. In order to boost output, thousands of enclosure Acts, which transferred land from communal to individual ownership, were passed by parliament. Between 1700 and 1844 close to six million acres of Britain found its way into private hands. Denied the common grazing land on which they relied, harassed by landowners whose vast tracts of property entitled them to greater parish voting rights and who consequently controlled the distribution of newly enclosed land, the smallholders were crushed” Source(s):'Racing Pigs and Giant Marrows' by Harry Pearson