Catherine Hutchinson was born 1803, at Gedling to parents John Hutchinson and Elizabeth Clarke. I believe her parents were both born about 1780 in the Gedling area, as they married at Gedling on 17 November 1798.

Catherine was baptised at Gedling Parish Church on 28 August 1803.  Gedlings name started life as Ghellinge, Gedlinga, Geddlings, Gettang finally as to day Gedling. The first written evidence of Gedling is in the Doomsday Book in 1068, when at that time it was known as Ghellinge. Gedling is in the middle of England, located only a mile or so from the River Trent, which the Vikings made good use of when visiting Nottingham. As all villages, Gedling was supplied with drinking water via a local stream this known as the Ousedyke.

On the 18 Feb 1827 Samuel Leaper married Catherine Hutchinson at Gedling, only months later on 24th June 1827, their first child Ann was christened, showing Catherine was pregnant with Ann at the time of their marriage. They set up home in Carlton and Samuel took employment as an agricultural labourer, which he did into his 70s. The couple raised 6 children, Ann (1827), Jane (1829), Elizabeth (1832), John (1835), Harriett (1840)  and Esther (1844). Catherine worked as a seamstress to support the family. Catherine died in the 1860s, and their daughter Esther continued to live at home and support her father until his death in 1879, age 77.

It was the coming of the railway in 1847, and the opening of the mine that completely altered the village of Gedling, turning it from a pleasant rural village overlooking the Trent to the suburb of Nottingham that it is today. Between 1830 and 1855 the railway superseded the coach as a means of travel. In their experimental stage the railways were uncomfortable and none too safe. Passengers were reckless in boarding the train when it was going at full speed or jumping off to pick up a hat or any other article and sitting on the tops of carriages.

Before this however Industry was coming to Gedling. The stocking frame had been invented in Calverton by Parson Lee who sent a pair of stockings to Queen Elizabeth I, probably hoping that she would grant him a Patent. She was not enthusiastic. But Stocking Knitting took a hold in Carlton, and as a result the population increased to such an extent, that the old Parish of Gedling was divided, and Carlton became a separate parish. In the middle of the nineteenth century there were 12 stocking frames at work in Gedling, but only one in 1844, although there were 426 in Carlton.

It seems that the hosiery trade never made much way in Gedling, in spite of the efforts of the Rector. About 1880 he made a definite push to encourage it, and in his Parish Magazine says that "if the trade were to revive and be brisk by a great and permanent demand for iron ... we stand some chance of seeing coal raised in this parish, and iron-works established among us". He was right in his first prophecy; the present inhabitants of Gedling must be relieved that the second did not come true also.

In fact throughout the nineteenth, and indeed well into the twentieth century, Gedling did not change greatly. The population varied only slightly; 458 inhabitants in 1832; 526 in 1894; the lowest number being 379 in 1877. Records made about the time of the Poor Law of 1834, seem to show that Gedling was prosperous, as it always has been. A "poor house" was put up in 1787 for Gedling, Carlton, Stoke and Burton but it was pulled down in 1839. "The poor" are sometimes mentioned in the Gedling records. After the Service in Church commemorating the jubilee on the 25th October 1809, the "poor inhabitants" ate a dinner provided by the Rector and William Elliot-Elliot.

The occupations of Gedling people recorded in the Nottinghamshire White's Directories, showed a mostly rural population, a great majority of farmers, two of whom were women, shoemakers (in 1853 there were three), tailor, dressmaker, carriers, game-keeper, gardeners, a builder, and blacksmiths, two of whom again were women, Mary Skellington in 1853 and Mrs Ann Skellington in 1869, and huntsman in charge of kennels in Lambley Lane. The great event in the history of Gedling in the nineteenth century was the building of the All Hallows' School in 1814. 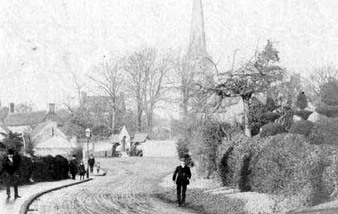 John Hutchinson married Elizabeth Clark at Gedling on the 12 Nov 1798.  To date I know they had at least one child, who was Catherine, born at Gedling in 1803.

Very little is known about Mary, but I believe she came from the Woodborough area, (as this is where she married) and was born about 1768.

From the 16th to the early 20th Century the village of Woodborough was a framework knitting centre, as witnessed by many cottage windows and old knitters’ workshops still in existence. As late as 1844 there were still 191 frames working but as this cottage industry gradually declined many of the knitters and their families turned to market gardening as the soil is very fertile.

A famous villager was the Rev. George Brown, born in 1759 into a family of framework knitters.  In 1788 he became an itinerant minister preaching the gospel as he travelled far and wide; he was known as ‘the Walking Concordance’ on account of his extensive knowledge of the Bible. He died in Woodborough in 1833 and is buried in the churchyard.

The church, dedicated to St Swithun, has a Norman font a north porch way. The tower was built in the 13th century with additions made in the 15th and the handsome 14th century chancel was erected by Richard de Strelley, Knight of the Shire, who represented the county in Parliament from 1331-1336. There were four bells in the tower and a local rhyme describes their sound in comparison with neighbouring churches.

The old vicarage on Lingwood Lane has a pancake bell tower and the bell is rung at 11a.m. every Shrove Tuesday to tell the housewives to prepare the batter for their pancakes. The original Woodborough Woods School was established in this building in 1736

Woodborough Feast is celebrated on the first Sunday after the 2nd July. In times past the feast was held at sheep shearing time and took the form of a ‘Fromety Feast’ when villagers went to the Hall to celebrate with Fromety (wheat) – cakes. Elizabeth Bainbridge was one of the Hall owners in the 18th century who maintained this tradition and was well known for her benevolence in many ways. 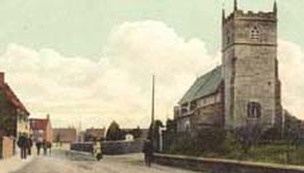 William Leaper married Mary Richardson at Gedling on 11 Oct 1758. Mary would have been pregnant with her daughter Mary, at the time she married. Her daughter was baptised only a few months after the couple married. William and Mary stayed in Gedling and raised their 6 children.

Both Thomas Leaper and Elizabeth Bancroft were thought to be born at Arnold, Notts. Details of their parents are not known. They married on 2 Oct 1725 at Arnold, and stayed in the Arnold area and raised their 5 children.