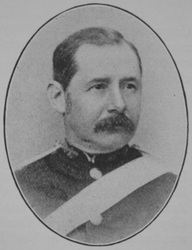 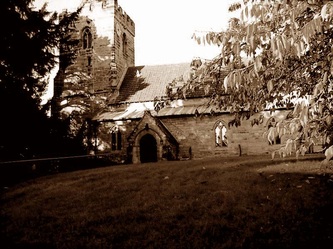 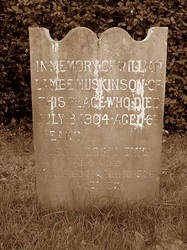 William Lambe Huskinson was born on 4th February 1839 at Caythorpe, Nottinghamshire. He was christened a few days later on the 8th February at the local church.

Within a short time of his birth, the family had moved to the hamlet of Bulcote, near Burton Joyce, Nottinghamshire. William went to school on Beaumont Street, Newark (where he could be found living at the time of the 1851 census). By the time of the 1861 census, in his early twenties he had set himself up as a land agent and was living as a lodger at Theatre St, St Leonard, Kent. Shortly after William married Emily Jessie Creft on 21 May 1861 at Campsell, Yorkshire. Emily was born in Buckland, Plymouth in 1843.

William and his new wife Emily returned to Nottinghamshire, and set up home in Epperstone. Here they quickly established a family, Thomas William was born in 1862, followed by John Henry (1863), Charles John (1865), Arthur Frederick (1867), and Harold (1870). At the time of 1871 census the family were supported by four servants.

In 1887 William is noted as an executor of the will of Mr Henry SHERBROOKE.

In 1896 William Lambe is listed at the country seat of Epperstone Manor, however a few years later he moved to a smaller cottage.

"Amongst the country seats not already mentioned, in varying styles of architecture, we may enumerate the following. The names appended are those of the present occupiers: COUNTRY SEATS - Epperstone Manor House: Mr. William Lambe Huskinson." SOURCE - http://www.nottshistory.org.uk/Brown1896/art1.htm

Frederick Spencer Huskinson was born on the 4th March 1840 at Caythorpe, Nottinghamshire. He was christened a few weeks later at the local church on the 27th March 1840.

At the time of the 1851 census, Frederick was a visitor with Emma Bousfield (his mother's sister), at New Uttoxeter Road, Derby. By 1861 he was back living with his parents in Epperstone.

I have no trace of Frederick after 1861. If you have any information, please contact me.

Thomas Huskinson was born on the 16h August 1841, he was christened a few weeks later in Bulcote, Nottinghamshire on the 18th September 1841.

I have no definite trace of Thomas after the 1841 census. If you have any information, please contact me.